Patented by Haramein in 2011, the HFR is a magnetohydrodynamic device that produces a spinning superfluid plasma via a rapidly rotating magnetic field (with a double torus topology). Unlike superconductive or composite mechanical rotation, the plasma magnetic density can be spun by means of inductive coils at extremely high velocities.

ARK Crystal, a subsidiary of Torus Tech, licenses the use of the HFR for electromagnetic treatment (modulation) of all of our ARK crystals or Precision Geometric Quartz. It is this modulation by the HFR that is the final step in the manufacturing process. After ~2.5 years of hydrothermal synthesis, the Precision Geometric Quartz (PGQ) crystals are polished, assembled, and ready for modulation, where they are positioned around the HFR within a copper experimental chamber.

When exposed to the toroidal structured spin-field of the HFR, spacetime throughout the PGQ crystals influences the quantum resonance properties of the constituent molecules, such that even when the crystals are removed from the HFR’s field, they retain the vibrational spin modes engendered by the coherent field dynamic of the HFR. Each ARK crystal is then a fractal of the larger toroidal field of the HFR, where molecular coherency may be sustained indefinitely. 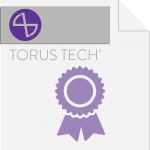